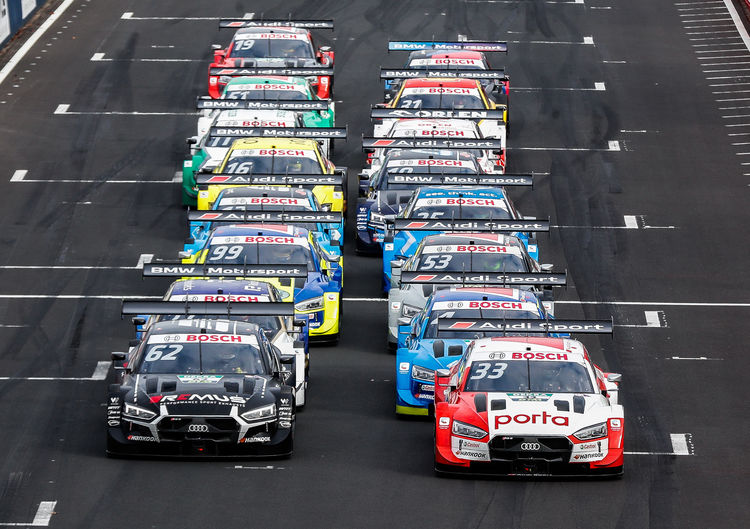 Posted at 19:05h in DTM by Jenny Falkner

Thriller in the DTM: With his third victory in a row, René Rast from Audi Sport Team Rosberg has taken the lead in the overall drivers’ standings. Before the last three races, the three title contenders are within a mere 15 points of each other.

Three races at Zolder, three victories for René Rast. At the start of the second Zolder weekend, the title defender was again in a class of his own on the Belgian circuit: pole position, victory and the fastest lap in Saturday’s race. “Two weeks ago, it still looked as if we wouldn’t be able to win the championship,” said Rast after the 22nd victory of his DTM career. “Turning things around like this within a week and a half is a great feeling. I am very happy. Robin (Frijns) was extremely strong today. He put a lot of pressure on me after his pit stop and also during the final laps. It was not an easy race.”

Frijns had lost valuable points last weekend due to an accident at the pit exit. Because of the fact that his car caught fire afterwards, Audi Sport Team Abt Sportsline had to completely rebuild the Audi RS 5 DTM on site. “The guys did a great job,” said Frijns. “I was faster than René at times in the race, but circumstances were against us today. After the safety car restart, I wanted to overtake (Ferdinand) Habsburg, but René was clever to make sure that I stayed behind Habsburg. After my pit stop, I attacked René, but he had push-to-pass and DRS available, because there were two other cars in front of us, so he was able to fend off my attacks.”

Teammate Nico Müller suffered another setback in the title fight. The Swiss couldn’t do better than eighth in qualifying. The previous leader of the standings was pushed wide on the opening lap, dropping him to the second-last position. After an early pit stop, Müller moved forward to sixth place, but still lost the lead of the drivers’ standings to René Rast. “It’s unbelievable that you can have so much going against you in such a short period of time,” said Müller. “Today was another day like this. The qualifying session didn’t go well. And as if that wasn’t enough, I was bowled away in the second corner and was then running at the back of the field. After that, it was the right decision to come in early. With this, I was able to make up some positions, but I couldn’t get past Fabio (Scherer).”

The Swiss wasn’t the only one to make customer team WRT Team Audi Sport cheer: In their home race at Zolder, Ferdinand Habsburg gave the Belgian team its first podium since entering the DTM at the beginning of the 2019 season. It was also the first DTM podium for the Austrian. Habsburg started from the front row for the second time this year. In the race, he only lost one position to Robin Frijns and then successfully defended third place against BMW factory driver Jonathan Aberdein. Fabio Scherer and Harrison Newey completed Vincent Vosse’s team’s best result in the DTM so far with fifth and seventh.

Jamie Green also scored points, although the Briton was spun around by BMW driver Philipp Eng on the tenth lap. A catch-up race brought him up to eighth. On the last lap, he overtook Timo Glock in the BMW with a courageous move.

Audi Sport Team Phoenix did not score any points. Mike Rockenfeller’s car was found to have a leaking connection in an oil pipe before the start. The German started the race, but had to park his Audi RS 5 DTM in the pits after four laps. Benoît Tréluyer finished 14th in his first race for Audi Sport Team Phoenix following a drive-through penalty. At Zolder, the Frenchman is replacing his fellow countryman Loïc Duval, who is competing in the “Petit Le Mans” endurance race in the USA this weekend.

“For me, the highlight of the race was Ferdinand Habsburg’s third place,” said Head of Audi Motorsport Dieter Gass. “WRT deservedly clinched the first podium for a customer team in the modern DTM era. René (Rast) has been unbeatable here so far. Robin (Frijns) tried everything today and was close at the end. It’s really tight in the championship now and I’m already looking forward to tomorrow’s race and the next part of the title fight.”

Three races before the end of the season, the three title contenders at the top of the standings are within 15 points of each other. Before the last of the four Zolder races (live on SAT.1 and ran.de on Sunday from 1 PM CEST), René Rast leads with 277 points ahead of Nico Müller (267) and Robin Frijns (262). Thus, each of the three leading protagonists can leave Zolder as the leader.