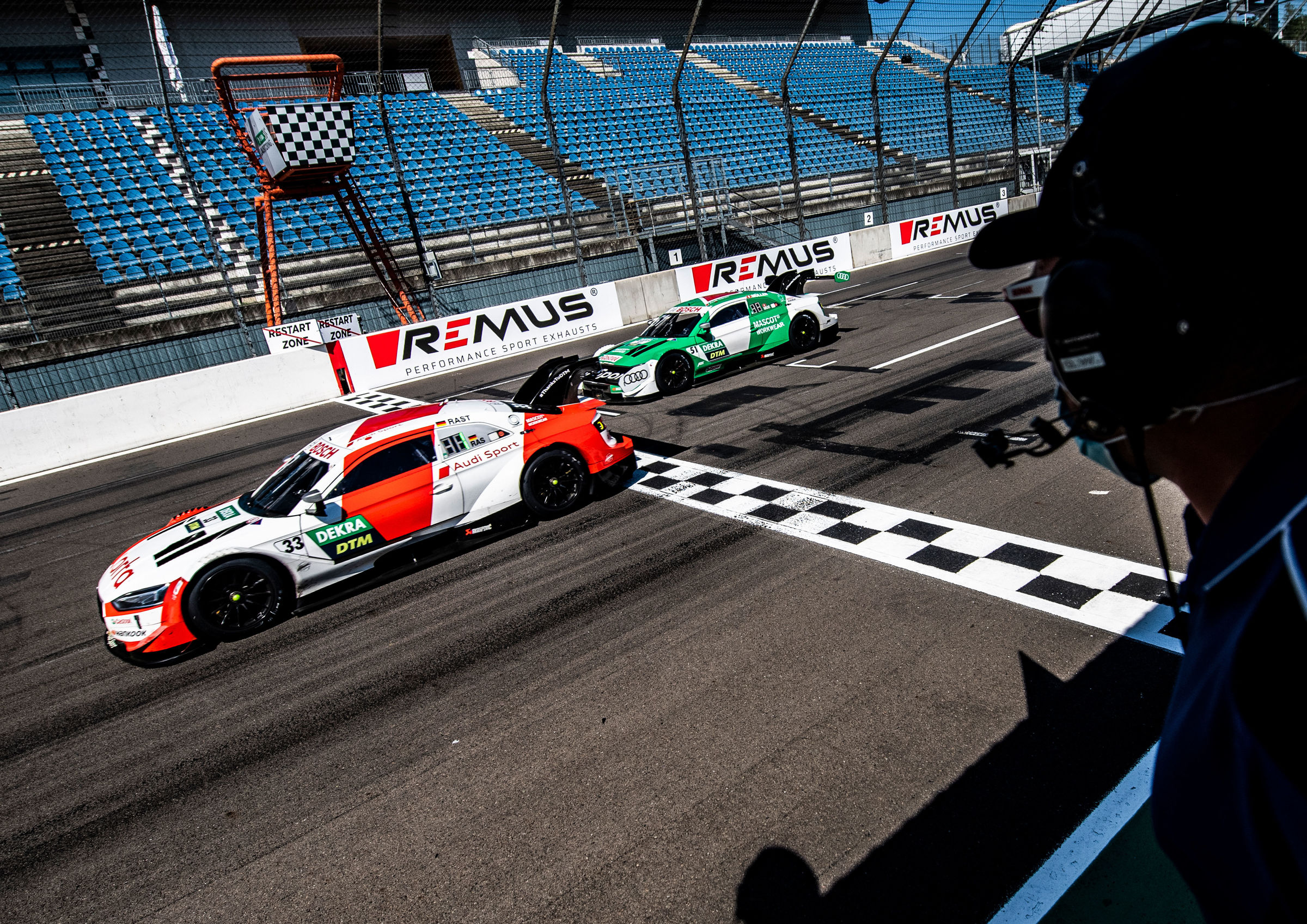 Posted at 07:26h in DTM by Jenny Falkner

DTM thriller at the Lausitzring: In a spectacular Sunday’s race, title defender René Rast from Audi Sport Team Rosberg and championship leader Nico Müller from Audi Sport Team Abt Sportsline crossed the finish line side-by-side in their Audi RS 5 DTM cars. 0.089 seconds separated the two Audi drivers. The last time the DTM saw such a close finish was 24 years ago.

“The race was pretty entertaining,” said René Rast, who had to fight hard for his first victory of the season – especially against pole sitter Robin Frijns. The two brand mates clashed in the first corner after the start. “I had to drive through the grass in Turn 1, and also afterwards the fight with Robin was pretty hard. We pitted early to react to an undercut of Robin and Marco (Wittmann). I knew that Nico would come in the end on fresher tires. Our strategy was brave, and it got pretty tight, but fortunately it worked for us.”

Nico Müller didn’t get a perfect start from second on the grid. “There was more grip than I expected,” said the Swiss. “When René and Robin did some rallycrossing in front of me, I briefly had a clear view. But I came onto the outside line in Turn 3. As a result, also Marco Wittmann passed me, and I dropped back to fourth. After that it was hard work – but we managed the race pretty well.”

After a long first stint, Müller returned to the track in seventh, quickly making up position after position and, with the fresher tires, eventually chasing leader René Rast. “In the end, only a third of the car length was missing for victory,” said Müller. “Yesterday the race seemed to be an eternity – today I prayed that it would last one lap longer.”

Müller’s teammate Robin Frijns started from pole position for the third time in the fourth DTM race of the year. “I didn’t expect this before the season started,” said the Dutchman. “The qualifying performance is great, but we still need to work on our race pace.” After an early pit stop, Frijns was first passed by René Rast, later by Nico Müller and two laps before the end of the race also by Marco Wittmann.

Mike Rockenfeller from Audi Sport Team Phoenix was running right behind Nico Müller for a long time but hit traffic after his pit stop. From tenth, “Rocky” fought his way forward to fifth. Teammate Loïc Duval had no radio contact with his team during the entire race and finished eighth after hard battles.

After finishing sixth the day before, Ferdinand Habsburg scored another point for the customer team WRT Team Audi Sport in tenth place. On Sunday, the Austrian impressed with fourth place in qualifying.

Jamie Green suffered a similar fate to Loïc Duval on Saturday: the Briton suddenly was unable to shift gears after hard fights and had to stop his car.

“A race can hardly be more exciting,” said Head of Audi Motorsport Dieter Gass. “There were some very tough battles throughout the whole race and until the last lap it was not really obvious who would win. It was extremely tight between René and Nico. I’m happy that we managed to clinch another one-two victory and that we showed an extremely strong performance in qualifying as well with the top six positions on the grid. In the DTM you simply must never stop improving. I’m already looking forward to next weekend here.”