Heading for DTM at the Nürburgring neck and neck 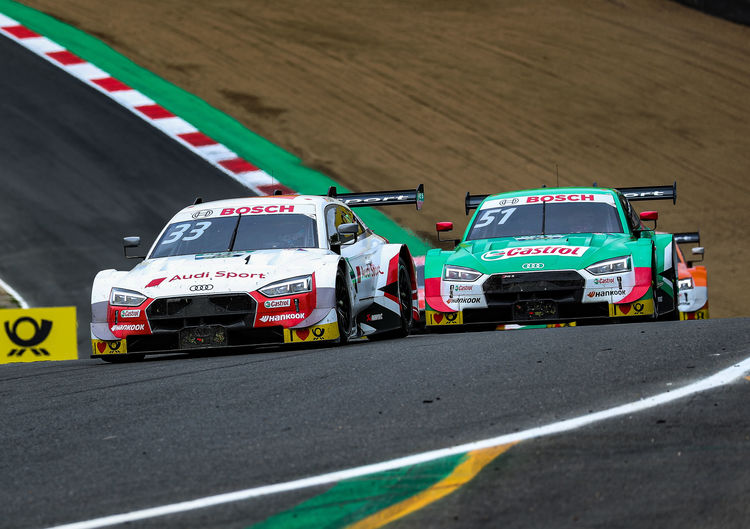 10 Sep Heading for DTM at the Nürburgring neck and neck

Posted at 16:11h in Uncategorized by Jenny Falkner

Who will be the 2019 DTM Champion? This question may be answered as early as on this weekend (September 14/15) at the Nürburgring (Saturday and Sunday live starting at 1 PM on German channel SAT.1).

“Following the early win of the manufacturers’ championship, we’re now challenged to clinch the drivers’ title, too,” says Head of Audi Motorsport Dieter Gass. “And obviously we want to also win the teams’ championship. In both championships, we’re traveling to the Nürburgring with a good advantage. But nothing has been decided yet. With René (Rast) at the Lausitzring, we saw how quickly you can go home without points in spite of a strong performance. And we’re not going to make the mistake of underestimating our opponents.”

Before the last four races, five drivers still have mathematical chances of winning the drivers’ championship: René Rast (Audi/234 points), Nico Müller (Audi/214), Marco Wittmann (BMW/167), Philipp Eng (BMW/140) and Mike Rockenfeller (Audi/138). However, Eng and Rockenfeller’s deficits are so large at this stage that the title race in reality will arguably be limited to Rast, Müller and Wittmann.

As the leader of the standings, Rast could theoretically secure an early title win at the Nürburgring on Sunday. However, to do so, he would need a 57-point advantage and a similarly perfect weekend as last year when he scored the maximum number of points with two pole positions and two victories. “Obviously, I can’t expect to score 56 points again,” says the driver of Audi Sport Team Rosberg. “But I’m confident that things will be going similarly well this year. I always like racing at the Nürburgring.”

Rast used the short break between the Lausitzring and the Nürburgring to unwind with his family at home in Bregenz and to recharge his batteries for the final sprint. His fiercest rival, Nico Müller, took a similar break. “I enjoyed having a day off here and there, to ride my bike around the lake and to meet family and friends,” says the Swiss who will contest his 100th DTM race at the Nürburgring on Sunday. “Having reached this benchmark in a series that’s as hard-fought as the DTM makes me feel very proud.”

The driver of Audi Sport Team Abt Sportsline likes the Nürburgring, too: “It’s a track with a lot of traditional character – obviously, above all, the Nordschleife. Even so, racing on the Grand Prix circuit or the short configuration, respectively, is always a highlight, too. The crowd there includes some passionate fans. The track is very technical. It’s important to find the right rhythm. Especially in the first sector, you can either gain or lose a lot of time. That’s where you have to have confidence in the car and strike the right balance.” His goal for the weekend is clear: he wants to keep the gap to Rast as small as possible and postpone the title decision to the finale at Hockenheim.

For Mike Rockenfeller, the Nürburgring is a home round. “I grew up near the circuit and have contested so many races there in my life that it always feels like coming home,” says the 2013 DTM Champion. His craziest Nürburgring memory? “That was 2008. I was on the front row of the grid in a previous-generation car. Although it was completely dry we started on rain tires because our weather service said it would no doubt start raining – unfortunately, the rain didn’t come and we had absolutely shod the wrong tires.”

“At this time of year, you can have all four seasons on a single weekend,” says Rockenfeller’s teammate Loïc Duval, speaking from experience. “I hope that we’ll have good weather and clinch a good result for our team. For Phoenix, the event is a home round, too – of all venues this is the one where the squad most ardently wishes to score a good result. My personal goal is a podium in each of the season’s last four races.”

Robin Frijns finished on podium three times in the past four DTM races. After the Lausitzring, the Dutchman treated himself to a short vacation on the Greek island of Santorini together with his girlfriend. Meanwhile, Jamie Green contested two GT3 races in an Audi R8 LMS – one of them at the Nürburgring. “With four races in a row, tests and work in the simulator, I was hardly at home,” says the Briton, who has been a member of the DTM’s 1,000 club: Green is the tenth driver in the history of the racing series to have scored more than 1,000 points. “I’ve never won a DTM race at the Nürburgring – I’d like to change that.”

Frijns and Green might be the drivers to tip the scales in the battle for the teams’ championship: at the Lausitzring, Audi Sport Team Abt Sportsline took over the lead from Audi Sport Team Rosberg – albeit only with an advantage of 22 points while 192 points are yet to be awarded.

The two races at the Nürburgring will start as usual at 1.30 PM, German channel SAT.1 will begin airing live coverage at 1 PM (CEST) on Saturday and Sunday. Tickets for the event are available online at www.audi.com/dtm.