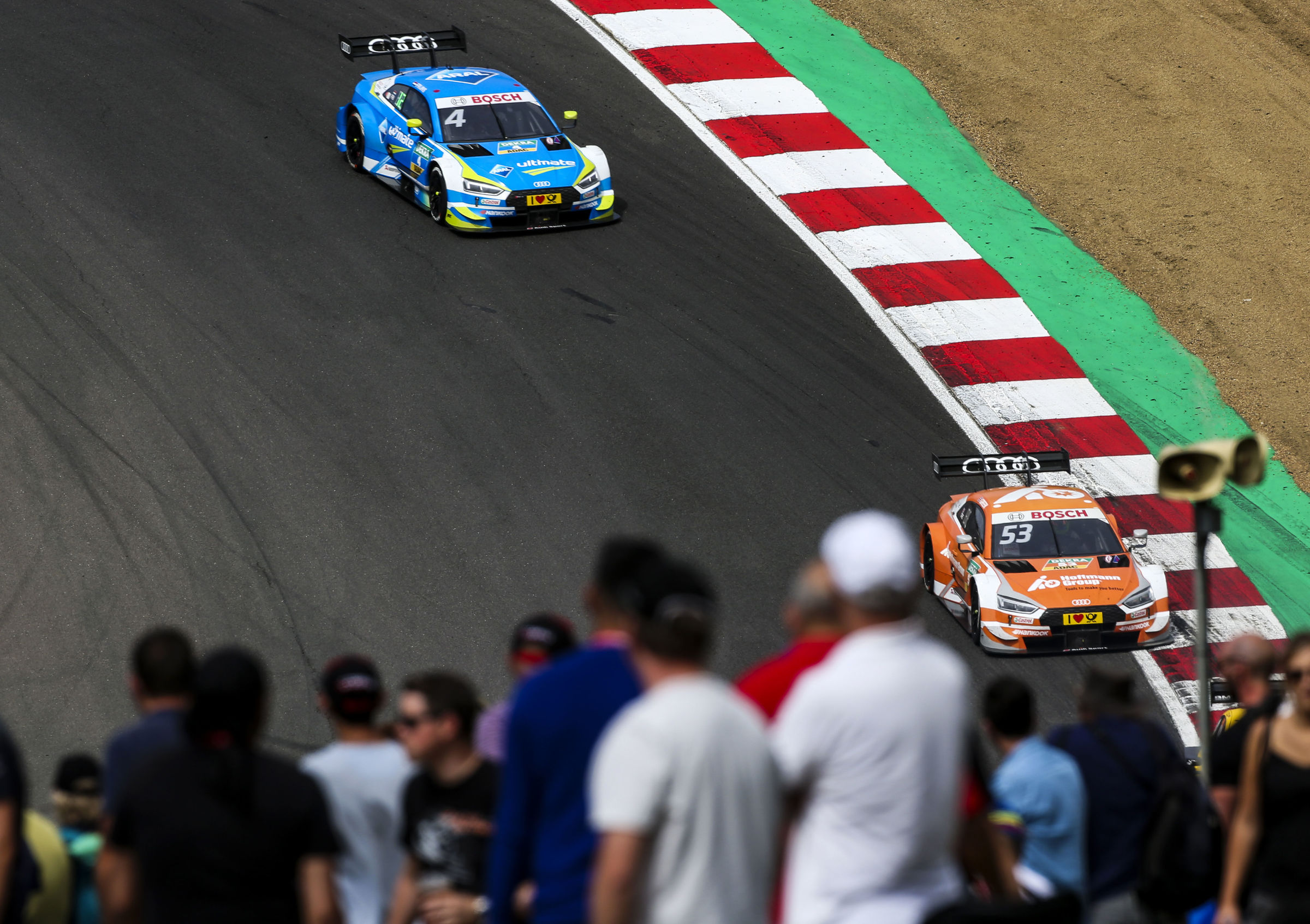 Posted at 15:47h in DTM by Jenny Falkner

DTM fans can look forward to the next highlight: On Saturday and Sunday (August 10/11), the more than 610-hp Class 1 cars will race at Brands Hatch. The tradition-steeped circuit near the UK capital London is regarded as one of the world’s most challenging race tracks.

After several visits to the Indy Circuit that is not particularly popular with the DTM drivers, the DTM, since last year, has been racing on the 3.916-kilometer Grand Prix Circuit that used to be venue of the British Formula One Grand Prix. “The track is an absolute highlight for the DTM,” says Head of Audi Motorsport Dieter Gass. “After the tremendous premiere last year, you ask yourself why we haven’t always raced there.”

The famous track sections such as Paddock Hill, Druids, Hawthorn, Dingle Dell and Clearways do not leave the Audi drivers cold either. “It’s cool that with the DTM we drive the same turns as Niki Lauda and James Hunt did 40 years ago or Nigel Mansell later,” says Jamie Green. “Those were my childhood heroes. Brands Hatch is a place with a great history.”

“I’m very much looking forward to the two races,” says leader of the standings René Rast, who with a third and a fourth place was the best Audi driver at Brands Hatch last year. “Brands Hatch is a real men’s track. There are many fast turns and almost no run-off areas. That means every mistake is punished immediately and you always have to be extremely focused. Arguably, everyone in motorsport knows the first turn – Paddock Hill. That’s a corner with character and a history.”

“With the new turbo cars, the track will be an even greater challenge,” says Mike Rockenfeller, who in 2013 won at Brands Hatch on the short Indy Circuit with a length of just under two kilometers and was on the top of the podium most recently at Assen as well. “With the power we now have it’ll be even more fun. The track is really great and has a few courage corners. In dry conditions, the tires will again play a crucial part.”

“It’ll really look spectacular when we fly through the forest with our turbo beasts and reach very high speeds,” says Nico Müller, the runner-up in the standings. “I had the opportunity to discover this really cool old-school race track last year during the DTM weekend. The track is really good fun. I’m extremely looking forward to it – and also to the very passionate English fans.”

His teammate, Robin Frijns, says: “It’s great that we race on traditional tracks like Zolder and Brands Hatch with the DTM. With our new Audi RS 5 DTM and the more powerful turbo engines, every race track is nice – even Zolder with its 90-degree turns. Brands Hatch is one of those legendary circuits that Formula One used to race on. There are many difficult turns. One mistake and you end up in the wall. That’s how it has to be!”

“Last year, every one of us drivers was happy about racing on the Grand Prix Circuit,” says Loïc Duval. “Brands Hatch is one of the highlights of the season. Motorsport plays a major role in England. That’s why it’s good that we’re racing there with the DTM. After all, it’s one of the most important racing series in the world. London is not far away. Many spectators came to the premiere last year. The track is cool, it runs up and down. The circuit is very narrow and overtaking isn’t easy. Even so, sometimes there were three of us running side by side in the DTM last year. And managing a perfect lap in qualifying is a great driving challenge.”

To the teams, the schedule poses a special challenge, too. “Brands Hatch is a two-day event with an extremely compact program,” says Dieter Gass, “so we need to make sure nothing goes wrong!” On Saturday morning, only 45 minutes of free practice are available, followed by qualifying for the first race just an hour later.

The two races at Brands Hatch on Saturday and Sunday will start at 1.30 PM local time (2.30 CEST). SAT.1 will begin airing live coverage on both days at 2 PM. Admission tickets to the race are available online at www.audi.com/dtm.