From zero to hero: Rast wins at Audi’s home round 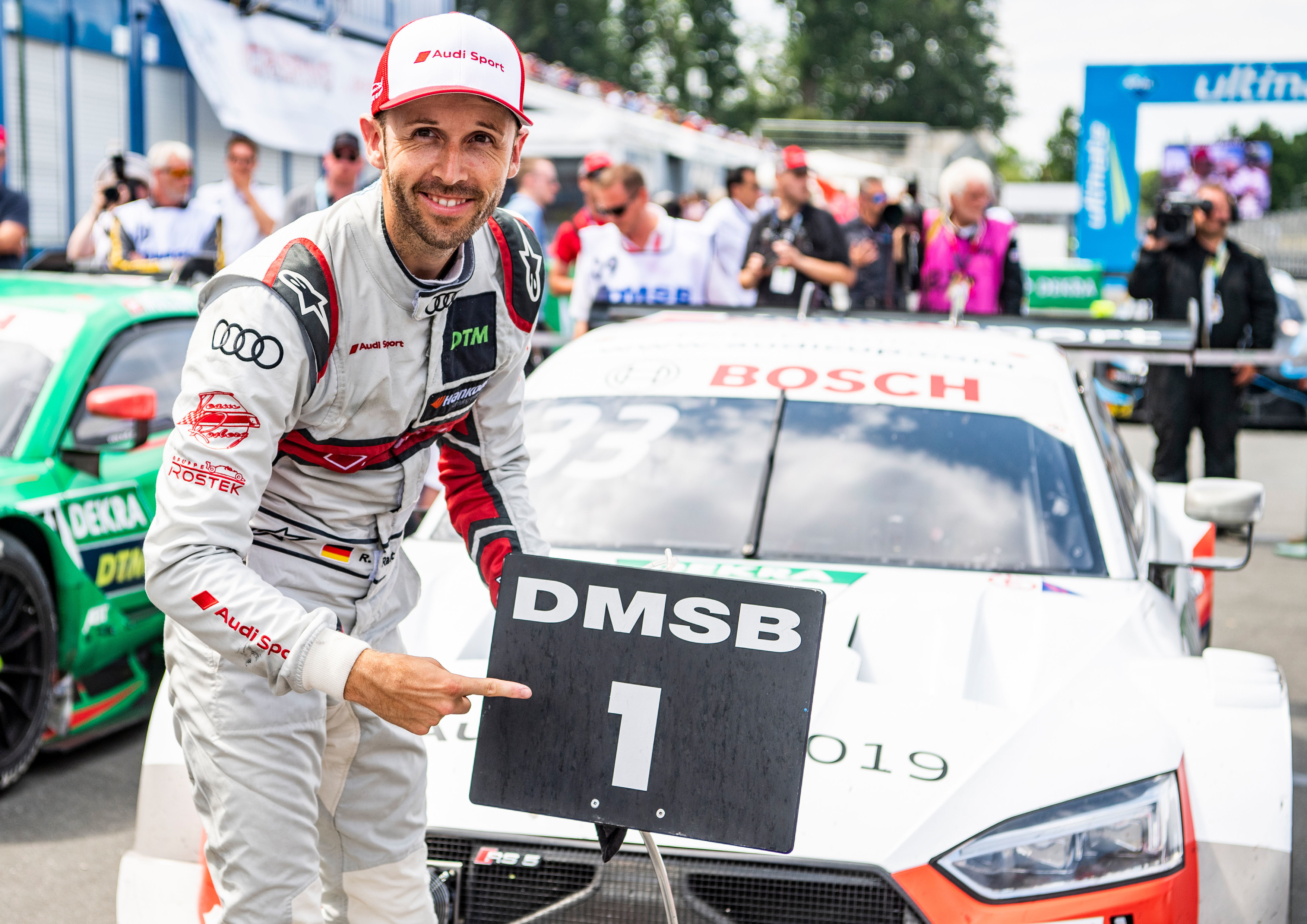 06 Jul From zero to hero: Rast wins at Audi’s home round

Posted at 18:45h in DTM by Jenny Falkner

A great day for Audi at its home round in Nuremberg: In front of a full house, René Rast won Saturday’s DTM race at the Norisring with an advantage of nearly 35 seconds in spite of having dropped to the last position at the start. Nico Müller, the fastest driver in qualifying, snatched the runner-up’s spot on the last lap, so perfecting an Audi one-two result. Loïc Duval completed the strong showing of the new Audi RS 5 DTM in fourth position.

On the way to his third victory this season and the 13th in total in his DTM career, René Rast from Audi Sport Team Rosberg experienced an emotional roller coaster ride. At the start, the 2017 DTM Champion stopped. Rast had to restart the engine and dropped to the last position. When a safety car period became apparent, his team reacted in nothing flat and called Rast in to pit for a tire change after just three laps. Shortly afterwards, he had overtaken all competitors and went on to finish the race with an advantage of nearly 35 seconds.

“That was a crazy race,” said Rast. “Obviously, we were somewhat lucky with the safety car. But we were very fast today and would have been in contention at the front of the field anyhow. I just need to practice starting some more. I released the clutch too quickly and stalled the engine. We also have to do better in qualifying tomorrow.”

Rast had to settle for third on the grid after having gotten stuck in traffic on the second set of tires, whereas Nico Müller from Audi Sport Team Abt Sportsline secured the three additional points for pole position. His time of 46.337 seconds is the fastest that has ever been driven on the current track configuration – clearly showing the performance capability of the new Class 1 race cars and the new Audi RS 5 DTM powered by a more than 610-hp two-liter four-cylinder turbo engine.

In the race, Müller managed setting a new lap record. The Swiss made a perfect start and easily pulled clear of his immediate rivals, but then became a victim of the safety car. Müller was among those drivers who had not pitted yet when the safety car was deployed. Following his tire change on lap 30, the Audi driver rejoined in seventh position, overtook one rival after another on fresh tires and, in a surprise attack in the last turn, even overtook Joel Eriksson’s second-placed BMW.

“That was especially important to me personally, because at Zolder I was caught behind him practically during the whole race and just didn’t get past him,” said Müller. “After the safety car, I no longer expected to finish on podium, because many cars had already pitted. I’m proud of my team that we achieved this anyhow. We did everything right today.”

For Audi, this was the sixth DTM victory in total at the Norisring. Most recently, in 2016, Nico Müller had won Audi’s home round at the Norisring. “Unfortunately, we’ve traditionally struggled quite a bit in front of our fans and employees,” said Head of Audi Motorsport Dieter Gass. “We were hoping that this would change with the new Audi RS 5 DTM. René was incredibly fast today. In spite of his early pit stop, in the end, he consistently drove fast times on the old tires. Nico’s race was perfect too from lights to flag. He was a little unfortunate with the safety car but fought back. Loïc’s comeback from the last row to fourth position was impressive as well. It’s a fantastic result for us and a great beginning for Hildegard Wortmann, who has been the new Member of the Management Board for Sales and Marketing since Monday and joined us in the pit lane to root for our squad.”

Jamie Green, Mike Rockenfeller and Robin Frijns scored no points on Saturday. Green finished in eleventh place after the front end of his Audi RS 5 DTM was damaged in a collision. Rockenfeller and Frijns were forced to retire with defects in the area of the charge air supply.